The State of My Garden After the Freeze

It's been a while, more than two weeks, since my last blog post. Once you get out of the swing, it's hard to get back in. We were in the grip of a two-week freeze then, so I posted pictures of frosty plants, wondering what would survive. I've had lots of ideas for blog posts floating around my brain, but haven't really gotten it together enough to write any of them.

Yesterday was a lovely day, plenty of sun, and it hit 50 degrees. I spent a good few hours out in the garden, moving some shrubs and perennials around. Today we were again promised sun, but it never materialized, at least here south of Seattle. There was plenty of fog, so thick at times I couldn't see the trees across the street. And so far it has hovered around 39 degrees all day. I tried to do some gardening, but came in after about 20 minutes with tingling hands.

Maybe it was sunny in town.

So, I'm writing a blog post about the garden instead of gardening.

Actually, I'm mostly just showing you some pictures, that I took with my new camera and the new macro lens that I bought for it. I'm still getting used to the camera and the lens, so bear with me. I had to get down on my belly for some of these. Elbows and body make a pretty good tripod.


There are plenty of swelling buds on everything. 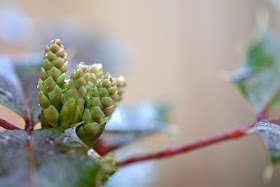 I don't recall the Mahonia repens blooming before, but it must have, because it looks like there are a couple of seedlings scattered around. 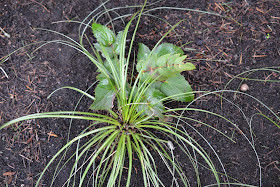 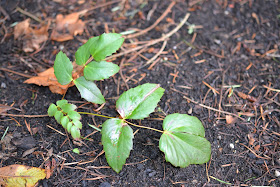 And now for the bad news, which is all about the Agaves.